This month we are in for a real treat.  Lee Wedberg shares his Stonefly Nymph.  If you were ever lucky enough to fish with Lee, you know that he is a fishy kind of guy and only fishes with flies that produce.  Nuff said.

Lead -     Secure 0.030 lead to each side of shank.  To do this, secure one end of lead near the hook eye using 5 wraps of thread, then bend lead out of the way and make three firm turns of thread on the shank.  Next secure the another lead strip to the other side of shank with 5 wraps of thread, bend out of the way, and wrap thread three firm turns on shank.  Continue so that one strip of lead is secured on each side of the shank.  Finally wrap lead on forward 2/3 of shank, and
overwrap with thread spiraled over head to tail.

Belly - Tie on some white fleece on under side at tail end of shank.

Body - Tie on part of a lock of black Romney fleece by its tip (often sun bleached); wrap thread forward to head.  With an occasional twist, wrap black fleece forward short of the eye; secure and trim.  Turn hook upside down, pull white fleece forward along belly of fly, and secure by  (counter wrapping) spiraling copper wire forward making evenly spaced segments length of the body.  Now spiral thread back over ribs to the middle of the fly.  Return fly upside up.

Wing case -  Use barbs from large black goose or mottled turkey tail feathers.  Apply Hard as Nails (with fingernail polish at grocery store), and snip about 5 mm (maybe 9 barbs) from the rachis.  Tie in at midpoint of body, extending backwards over bend of hook.

Legs - Use guinea hackle feathers.  Determine the length of barbs to use as legs, then strip and remove all longer barbs.  Pinch and flatten the rachis at the base of the remaining barbs.  On top of the wing case, secure rachis at the base of the remaining barbs with the stripped rachis pointing toward the head, and the barbed portion toward
the tail.  Trim and remove stripped rachis. Carefully pull tip of feather forward, separate about 5 barbs on each side and secure with two or three thread wraps, then pull wing case over and secure it at the same point.  Move thread forward and repeat once or twice to complete four or six legs emanating from beneath the wing case.

Antennae and head - Wrap a thin head, then tie on two thin rubber legs or peccary hairs for antennae, holding antennae back over the fly.  Continue wrapping a tapered head.  Finally pull antennae forward and overwrap to hold them splayed forward.  Whip finish immediately behind the bases of the antennae.  Trim antennae to about half the length of the body of the fly.

Three photos and instructions for small version are below:

This smaller version seems to hook at least as many fish as the larger.  It is tied exactly the same as the larger size above, with the following exceptions:

Posted by caddiscase at 5:49 AM

I hope that everyone enjoyed their holidays, and you are healthy and happy starting the new year.  Lots going on at the McCants household with the heavy snow and tree damage.  I do hope that you all made it safely through the storm and are not without power and enjoying the snow we have this year.  I understand that this was the second most snow in Medford in the last 100 years (if you can trust those weather persons). In any event, I am looking forward to our coming events and time together as we learn from one another both old and new tricks in our tying efforts.
Mr. Mark Teeters will tie two flies for fishing everywhere.
Mark will tie the Gimp, a Midwestern nymph fly designed by Lacey E. Gee, and identified in “Practical Flies and Their Construction”, 1966, page 34.  The fly is used in the Midwest for “most uncooperative” rainbows and browns (also “steelheads”).  It also is used for panfish like bluegill and crappie.
Gimp
·       Hook – any standard number 10 down eyed (and debarbed, of course),
·       Thread – any claret or red 6/0 to 16/0 thread,
·       Tail – a few fibers (5-8) of dark blue dun hen hackle fibers,
·       Abdomen – grey wool,
·       Wing – two Gimp feathers (aftershaft feathers at base of Amherst Pheasant Tippet feather),
·       Hackle – Dark, blue dun hen hackle, 2 turns only (do not overdress the hackle) 2-3x hook gape
·       Head – Thread and then whip finish. 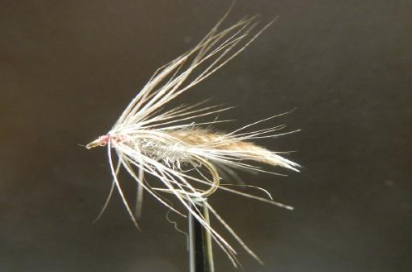 Additionally Mark will tie a fly of his design which he calls the Sleech.  The Sleech is used in both rivers and lakes for all species of fish.  The key features of this pattern are the profile and use of materials that have maximum mobility.  This fly uses the minimum of materials for maximum effect. The pattern follows below: 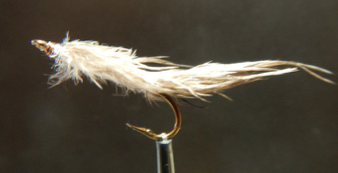 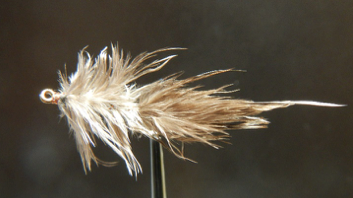 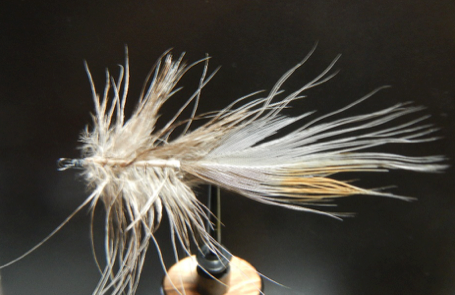 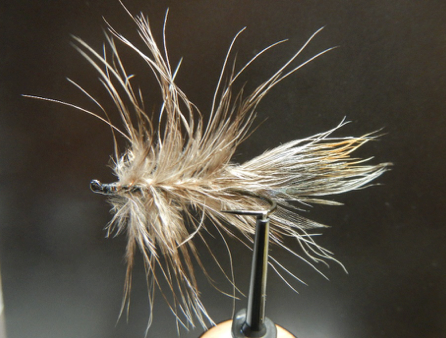 This Month at the Tech Table

The Folded Post Parachute hackle, Pull Over hackle, or Hackle Stacker, no matter what you call it, mastering this technique will open up a whole new category of patterns for your fly boxes. Included will be some helpful hints on tying parachute hackles. Don’t miss this informative mini seminar right after the guest tier presentation. 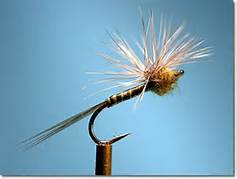 Posted by caddiscase at 5:01 PM