Hello to all our members who have been dealing with the COVID reality. We have all been missing the comradery and learning of new tying skills and patterns.

Due to our state still being on lockdown and not knowing when it will end, there will be no meeting in May and June {annual BBQ}.  I therefor propose that our first meeting be in September, second Tuesday as normal and it be a combined BBQ, raffle and that we have 2-3 members tie at this event. I believe that this is the best “socially responsible” way to move forward with our group of wonderful friends.

Additionally, I have an idea to help get over our need for human interaction and to hone/improve our tying skills.  I will open a new ZOOM account in my branding name (McBears Specialty Tys) at the business level.  I will have tying sessions on Thursday nights from 6:30-8:30pm starting this Thursday. I will also ask for other tyers to assist by being guest tyers every other week.  In order to do this I will need to know each members Name, telephone, and email address so that I can invite you and let each party know the passwords we will use for our ZOOM meetings.  I chose Thursday so as not to interfere with future clubs meeting and I hope this helps to keep us engaged and to continue our learning, teaching and develop our tying skills.

I hope that all of you have remained healthy and your families continue to be safe.


Due to concerns over the ongoing Corona Virus outbreak the Board of Directors has cancelled the March and April Meeting.
Posted by caddiscase at 1:09 PM

RAY SLUSSER TIES FOR MARCH 10 MEETING
I called Ray to see if he had decided on the patterns he would tie, and he told me he had been thinking about it, and decided on tying Polly’s Fledermouse pattern, because it demonstrates several of Rosborough’s characteristic techniques. (This should not be confused with the Fledermaus pattern.) He will also tie a classic steelhead Rusty Rat on a dual barb hook (not to be confused with a Rogue Rusty Rat).
I have known Ray for about 20 years, but never well. He and I would run into each other quite often at Rusty Randall’s shop, and chat awhile. I never got to watch him tie much, so I am really looking forward to his presentation. He told me he also is looking forward to it. I know I don’t have to urge you who know Ray to be here, and anyone who knew Polly will enjoy reminiscing with Ray about that.
Those of you, like me, who never knew Polly will be enriched by the presentation. As a retired history teacher, I am always interested in first-hand information about important people and developments (especially in the area of fly fishing and fly tying).
The pictures below are not Ray’s flies, but pictures I pulled off the internet. The Fledermouse is supposed to be authentic, but I can assure you the one tied by Ray will be. And, the single hook Rusty Rat is just to show the basic pattern. If you have never tied on dual hooks, you will be interested in seeing how different that can be.
Tell friends you think of who might be interested, and we will SEE YOU THERE! 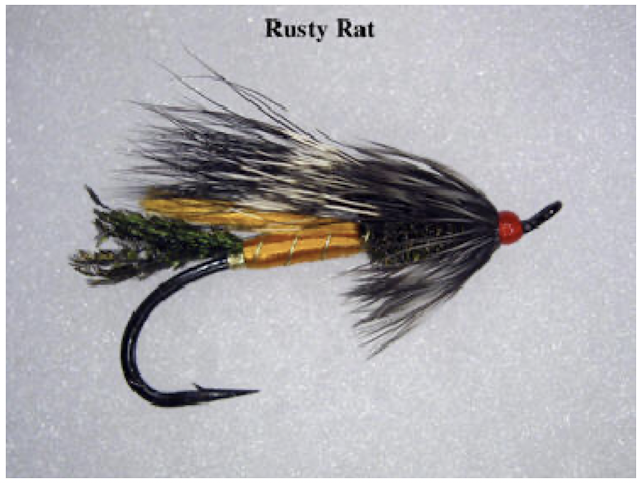 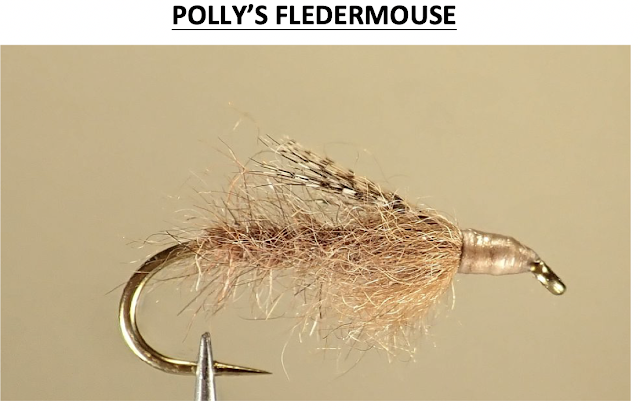 PETER GIFFIN TO TIE AT FEBRUARY 11 MEETING
Peter will be demonstrating how to tie some flies he proved out over the past year, fishing the Holy Water, Silver Creek and the Owyhee. You won’t want to miss this presentation of flies proven to catch fish in our waters.

RAY SLUSSER WILL BE PRESENTING THE PROGRAM FOR US FOR THE MARCH 10 MEETING – a unique opportunity
Ray is a resident of the Grants Pass area, long-time fishing guide and a founding member of Southern Oregon Fly Fishers, where he taught its fly tying courses for some years. He also tied flies for some time for Polly Rosborough.  I have heard that Polly was known for requirements for how his flies were to be tied. Ray told me Polly was left handed, so all the right handed tiers had to reverse tie the flies (that is, wrap under the hook). I promise you will enjoy this presentation, and I am sure those of you who knew Polly, will have things to discuss with Ray.
Posted by caddiscase at 4:35 AM

These dates are subject to change due to weather and
river conditions.

As usual I can always use flies for each of these outings.
It would be nice to know ahead of time what flies I will be
getting so I can plan accordingly.
Thanks again for all you do.

At the December meeting John MacDairmid put a two page flyer on each table.  Hopefully you read it.  Click this link for a better view of what this is about in our area www.northwestenvironmentaladvocates.org.

This vital legal action needs funds to keep this going.  Patagonia has offered to match any donations.  You can donate right from your computer.  Go to https://www.patagonia.com/actionworks
The matching funds are a limited time offer that ends December 31.
Posted by caddiscase at 4:16 AM


Message From John MacDairmid
Nine  SOFT members were very generous in donating 9 dozen flies in support of WaterWatch.  These flies were transferred to SOFT boxes and will be entered in the silent auction of the annual WaterWatch Auction next November.  More flies would be appreciated.  Both trout flies and  steelhead flies are bid up at the auction.

Slide cone head onto kook and place in vise
Wrap hook shank with thread and return forward. Tie in and wrap 20 wraps of .020 lead back towards hook bend from eye and tie off. Tie in .015 lead wire on sides of the remainder from the .020 lead wire to the beginning of the hook bend and tie off. Squish lead to make body wide and flat. Make a small bump behind the .015 with thread and tie two goose biots in just above the bump-the bump will splay the goose biots. Wrap the lead with thread in a crisscross pattern to keep lead in place and coat with head cement. Tie in gold wire and then tie in black floss both just above the goose biots. Wrap thread  forward toward cone head and whip finish and place thread in thread holder. Wrap black floss forward covering lead and whip finish and place thread in holder. Wrap wire forward to create a segmented body. Tie off wire and then wrap thread back two fifths from the eye. tie in a 1/4"x 1"strip of black balloon material for wing case. Dub a small amount of thread and create another bump to tie in two black goose biots for the first set of rear legs. Using thread only, tie in the two goose biots, one on each side and dub forward to the next section and tie balloon material forward creating the first stage of the wing case and first part of the thorax. Repeat the last step to create the next section of the thorax and second set of legs-middle legs. Repeat again to create the final set of legs-the front legs. Dub dubbing forward under conehead and tie off balloon leaving a flap. Cut the flap to make a v shaped pattern in the wing case and whip finish. the flap should fold back overlaying the front of the wing case. Tie thread around the back neck of the eye above the conehead and tie a goose biot on both sides of the eye to create antennas. Whip finish and apply head cement.

I want to thank everyone for contributing to Keaton's progress in tying and ultimately fly fishing. He has had success in both thanks to your generosity.  At least once a month I will be meeting with him to tie a new pattern. Needless to say, he is loving it !!! The other day his dad sent me a picture of the fly that I taught Keaton to tie that he himself had taken a swing at and the fly was stellar. Keaton would have had to have shone him how to tie it because I didn't. Keaton has an older brother Braden who is in his freshman year in Missoula Montana and I am also teaching him about fly fishing. I will get a chance to teach him to tie when he comes home for Winter break in a couple of days. I visited him in Montana a couple of months ago and found my favorite lake of all time. I have never felt trout that were that strong pound for pound and I fish Diamond Lake and the Williamson River a lot. The fish were really tall (big shoulders) and all were in the 17-22" range with a few that frankly I could not stop, so I don't know how big the were, and never a day with less than 20 fish. Anyway thanks again and tight lines- Mark Swanburg

Posted by caddiscase at 2:39 PM

Follow by Email Enter your email and receive automatic updates.

After you have entered your email on this page, you will receive a message asking you to verify your request. Be sure to click the link to complete the process. This is called the double opt-in. This is for your protection.